REGIONS COMMIT TO THE GREEN ECONOMY

| On  International Women’s Day 2017, UCLG recalls the vital role of gender equality in the flourishing of local democracy and the achievement of the Sustainable Development Goals (SDGs), the New Urban Agenda and the Paris Climate Agreement.

In particular, UCLG wishes to underline the vital importance of increasing the proportion of women in locally elected office as part of the global commitment to Sustainable Development Goal 5 on gender equality and women’s empowerment.

As the spheres of governance closest to the people, local and regional authorities are instrumental to lead, together with civil society, the paradigm shift necessary to achieve women’s empowerment in the workplace and other areas of public and private life

Furthermore, it has been demonstrated that increasing the representation and participation of women in public administrations makes it more likely for public resources to be allocated towards investments in human development priorities, including child health, nutrition and access to employment.

UCLG estimates that around 20% of councillors and just 5% of mayors globally are women. We celebrate that the SDGs directly address the issue of women’s political participation in Target 5.5., which aims to ensure women’s full and effective participation and equal opportunities for leadership at all levels of decision-making in political, economic and public life.

However, there is currently a lack of global data on the number of women in local councils. The lack of an indicator on women’s representation in local government makes it very difficult to track progress on the achievement of SDG 5 across the world. Achieving gender balance in local government is also important for achieving SDG 16, in particular targets 16.6 and 16.7 on accountable institutions and representative institutions at all levels.

In order to make progress in this vital area, UCLG calls on the international community to make improving data on gender equality in local government a priority to drive the achievement of SDG 5. In particular, we call on the international community to make efforts to gather data to support the proposed SDG indicator 5.5.1 on the representation of women in local government.

At the same time, we call on national governments and multilateral organizations to continue to support regional and international networks of local governments to facilitate knowledge exchange between their members on the promotion of female participation and the mainstreaming of gender equality policies.

UCLG and our members reaffirm our commitment to the Paris Local and Regional Government Global Agenda for Equality of Women and Men in Local Life, signed by hundreds of local elected women and men in 2013, and to putting the goal of gender equality at the centre of our agenda.

Read the publications of UCLG: 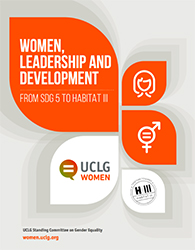 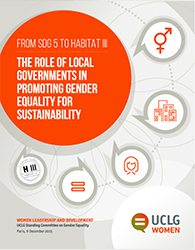 Special Envoy for climate change of the UN Secretary general

U.N. Messenger of Peace for the Climate

Director of Sustainability and Environment, EDF